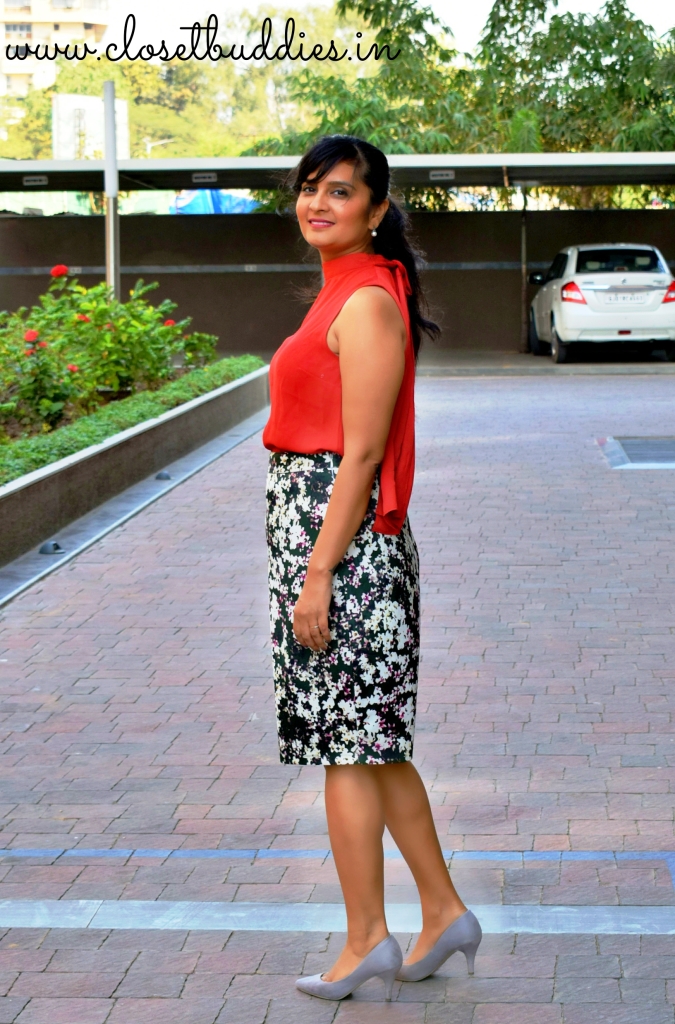 So, I am in the mood for something “frivolous” today. After, I got back from my vacation I’ve been catching up on the telly and I saw some episodes of the much hyped current season of KWK. I like K.Jo. I like him for his movies (most of them), his candidness (he can be a b**** when he is in his element) and his unabashed spirit of having fun (that includes dancing to “Radha Bai” with latkas and jhatkas than can put any belly dancer to shame) and most of all because he is trying to make his place in a judgemental world (and managing to do quite well at it).

However, the Kangana Ranaut controversy confused me a bit. Why did he get so defensive? It’s ok to be wary of outsiders, it’s ok to want to work with people you’ve grown up with and it is definitely ok  to be insecure about letting new people in, in your coterie. What’s not ok is to lash out at someone who calls you out for your so called “nepotism” and accuse them of playing the “woman” and “victim” card. It’s almost like she hit a nerve. Did she K Jo? She did right?

The other episode that got me thinking was the “Coffee Awards” or is it “Koffee”? Anyway, so I see the so called Jury Members pushing their own favourites rather than doing the actual judging. Most of them are B’Town insiders by virtue of birth or marriage or who they are dating. Rohan Joshi is seeing Shaheen Bhatt and is practically Alia Bhatt’s jiju- he nominated her for every single award, Malaika Arora though now separated from Arbaaz still seems to be trying to make amends with the Bhai family by using her “veto”  (with no humility whatsoever) to give them all the possible trophies and Ayan Mukherjee (Rani Mukherjee’s first cousin) is also a K. Jo. protégé and pushed for Ranbir (his alleged best friend) or simply just agreed with Malaika on every single thing.

The only one who seemed to make some sort of sense was Neha Dhupia who is actually an outsider. She was constantly vetoed and put down by the other three for putting too much “logic” into everything. For all I know it was scripted but I did feel it was unfair of the 3 to gang up against her and K Jo just sitting and laughing his awkward laugh when she made noise about it.

Lets face it, the best B’wood can do is be tolerant about outsiders. How else would you explain their smirk when Kapil Sharma was mentioned? The same Kapil Sharma whose show they were all dying to go on to promote their movies! I see Miss Malini and Rohan Joshi (when he breaks up with the Bhatt family) going the same route when their usefulness runs out. Remember how Meghna Mathur (Priyanka Chopra’s character in Fashion) falls out of favour across the industry when she outlives her welcome. Despite their differences, Bollywood comes together as one when they are shunning the “outsiders”!

Another controversy that’s been doing the rounds is the Mira Rajput statement. Working Moms across the country are writing open letters and expressing displeasure. I am a working mom but I wasn’t outraged. Why you ask? Simply because that’s her opinion. She doesn’t want to work because she wants to spend more time with her daughter and thinks she is not a “puppy” to be left behind at home while she is out working. Agreed the puppy bit was a little insensitive and uncalled for but the fact of the matter is she is just justifying her choice of being a SAHM. We all have to make that choice- of spending the whole day with our child and giving them all our attention vs giving them a better life, feeling independent ourselves and leaving them with nannies or at day care centres. So if you and I have our reasons for making our choices so does she. She is a new mum struggling to make it work. Remember when you were a new mum? Remember how lost and tired you were all the time? So, I suggest you cut her some slack and get back to your jobs whether you are a SAHM or a Working Mom.

Why should office wear have rules? No colours, no florals, only monochromes? Lets break ’em rules, shall we? 🙂

Psst: I actually wore this outfit to work. 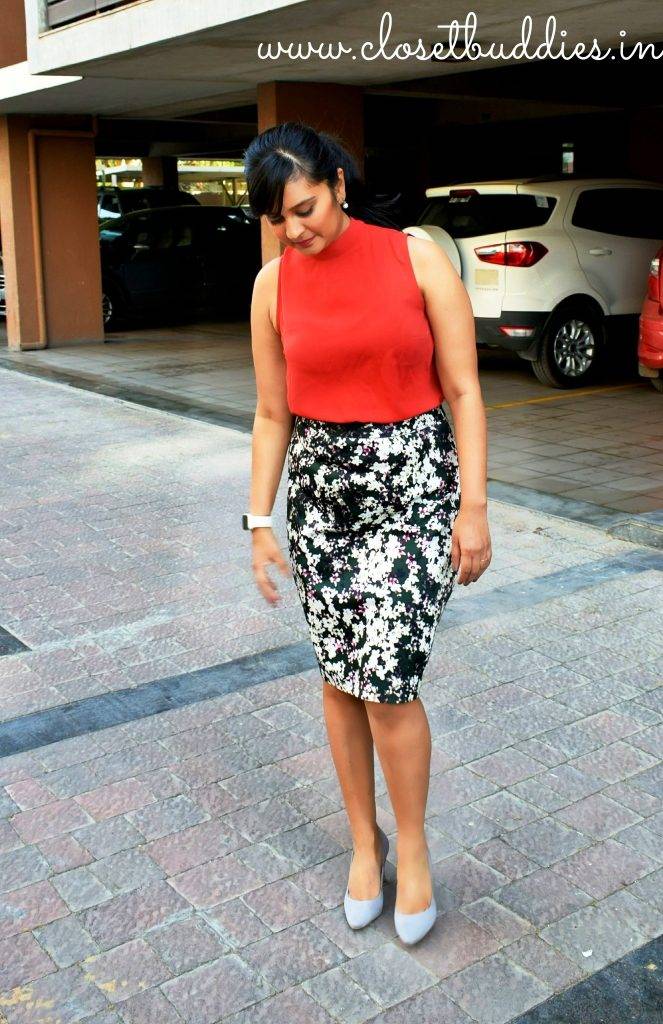 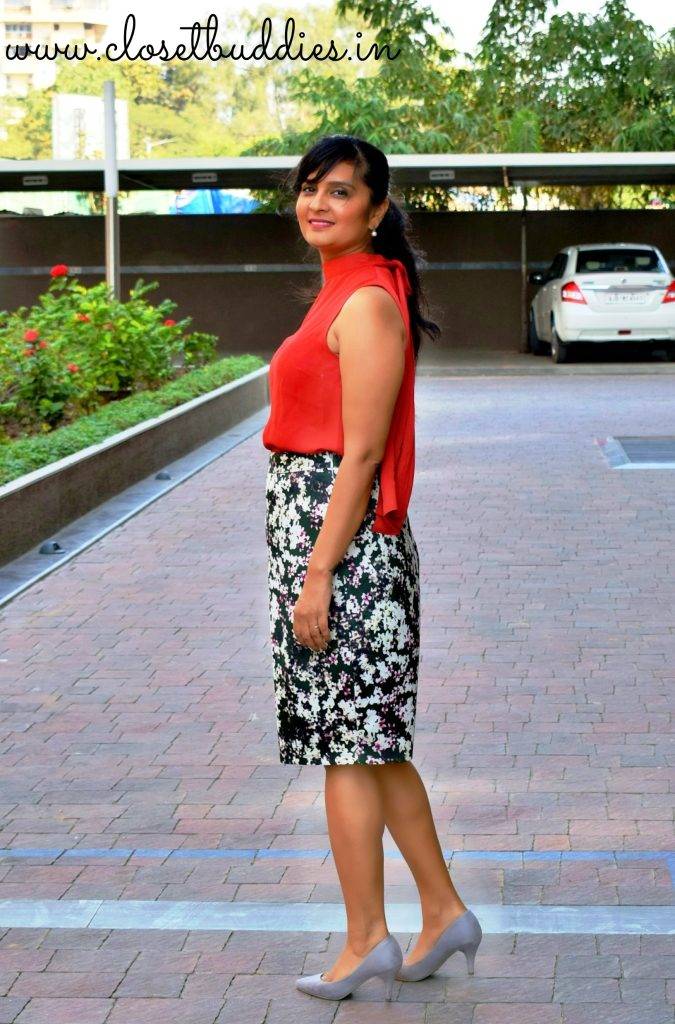 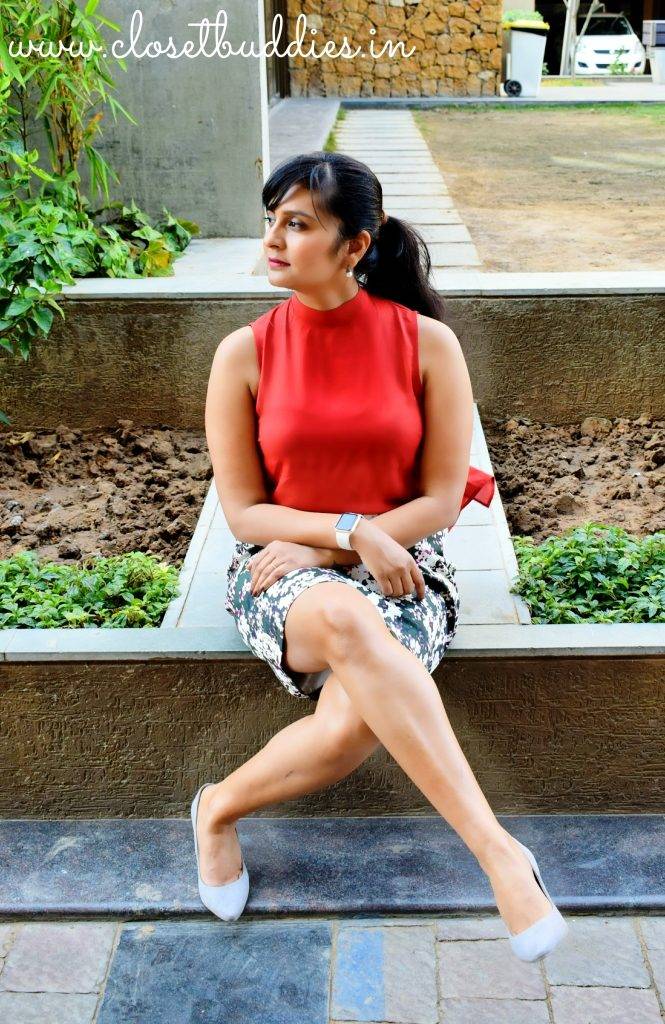 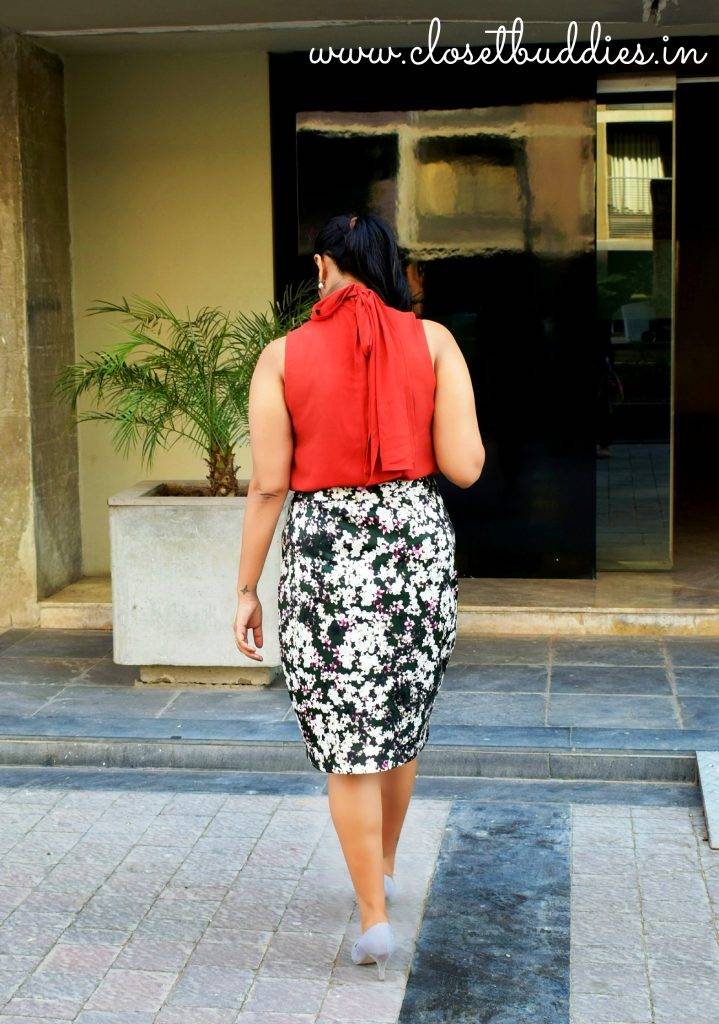 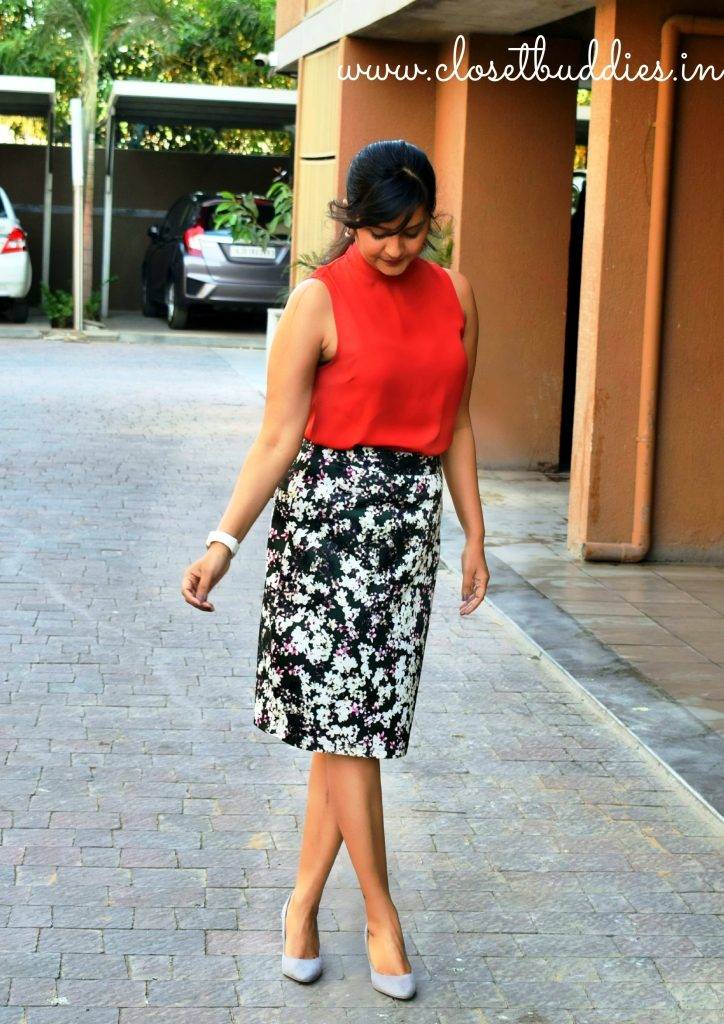 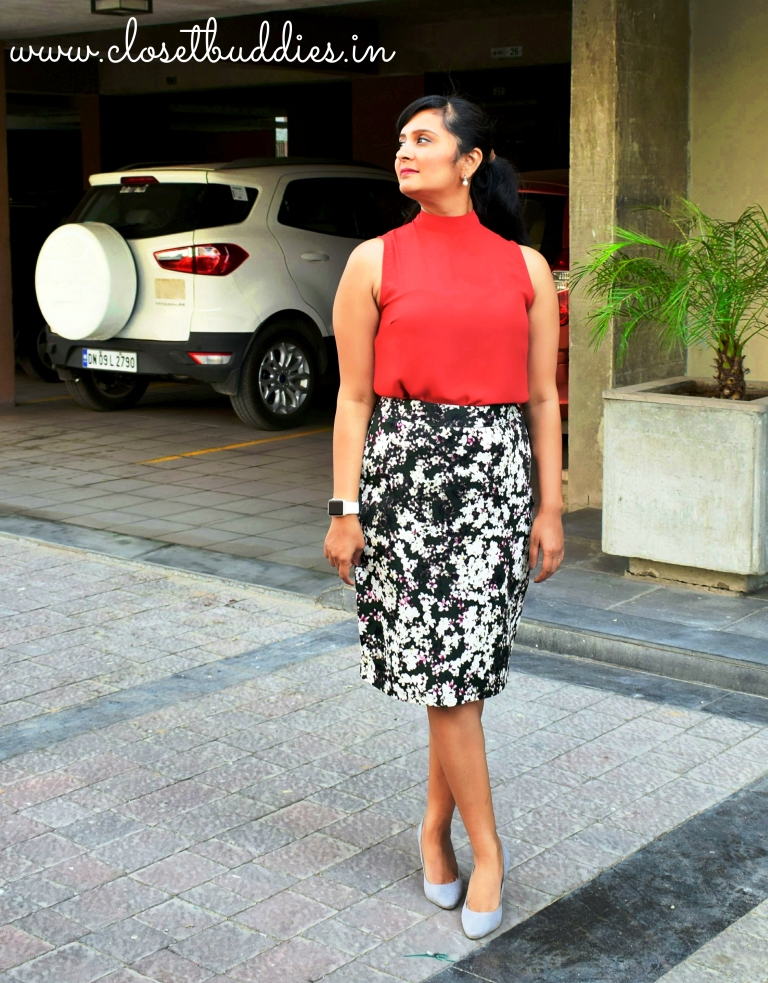 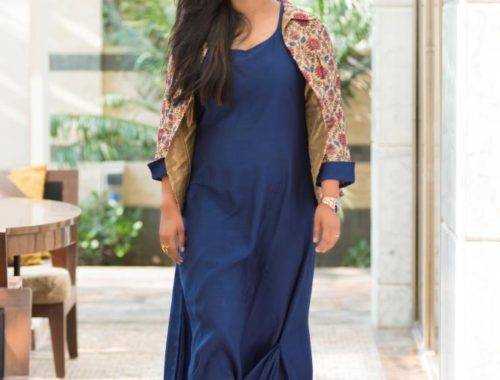 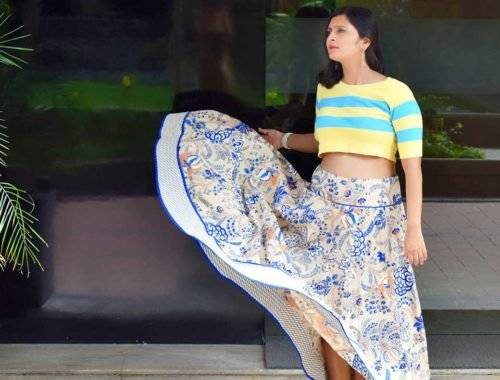 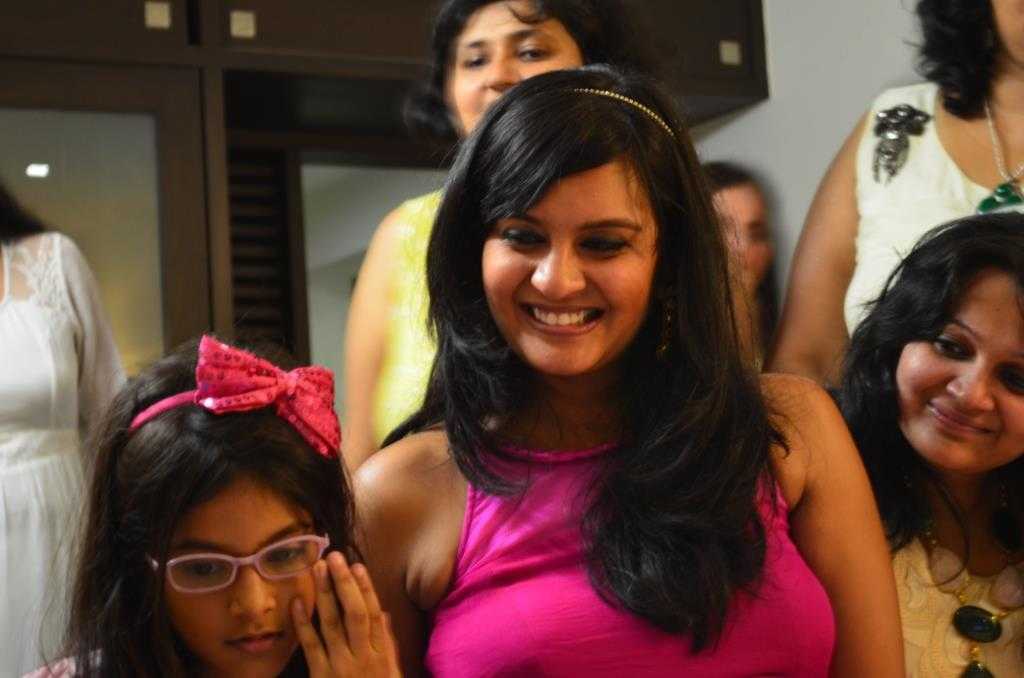 The Upadhyay Baby Shower-What I Wore